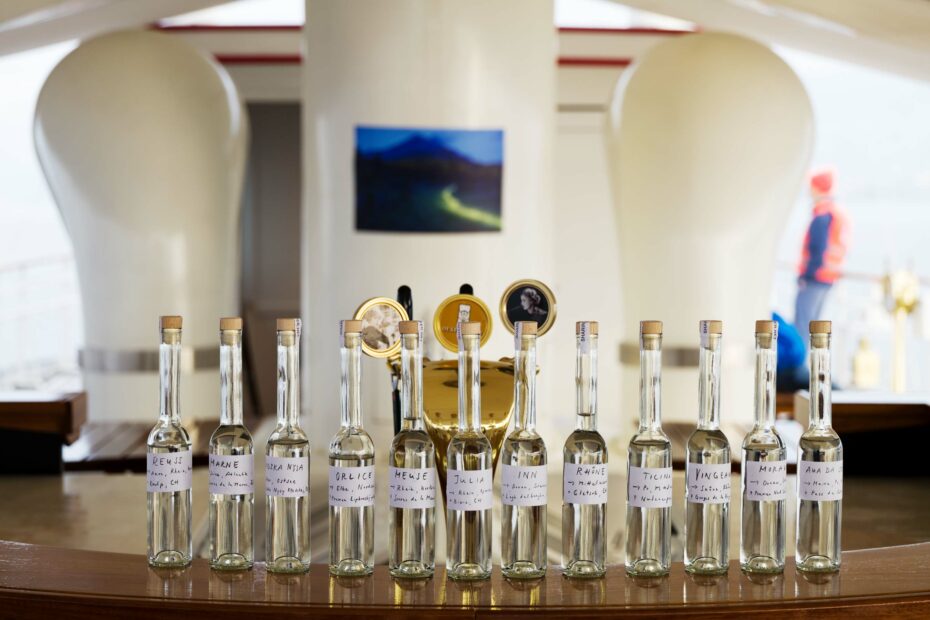 The samples are ambassadors of twelve rivers and stand for the abundance of the planet’s donations, pure watery information and creative power.

The twelve rivers Marne, Meuse, Vingeanne, Rhône, Reuss, Ticino, Julia, Mera, Inn, Orlice, Nysa and Morava rise at four node points of the European Watershed. The waterheads regions were visited by the SHARING WATER research team between 2019 and 2021, dealing with ecological, political and social issues regarding the treatment of water.

The 270 guests of the “Romanshorner Festspiele” were invited to get in contact with these sparkling river-ambassadors. Small samples of spring water could be sprayed on, the act of embodiment being accompanied by information about the rivers course and some of the topics connected to it. 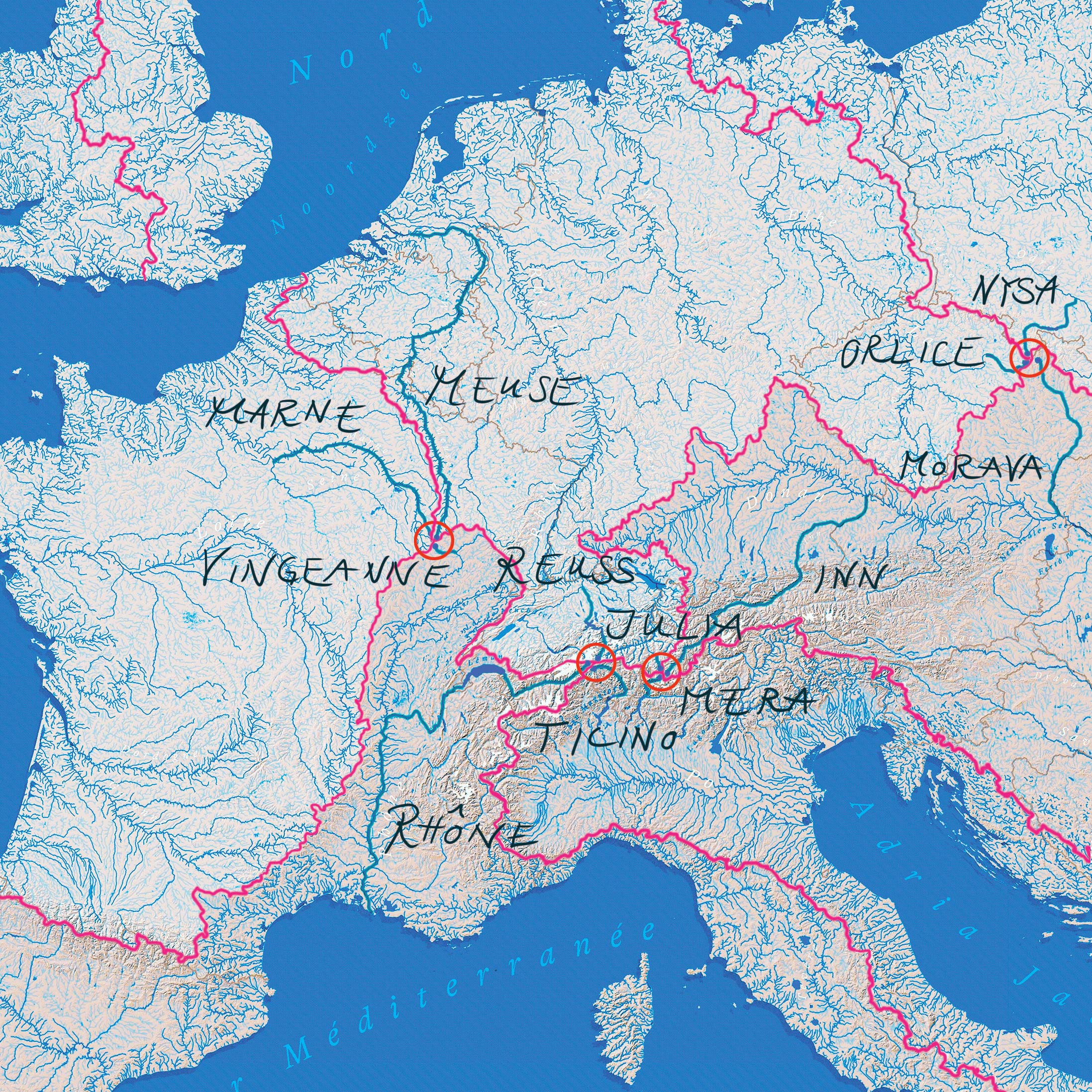 Milkyways of Peace
The “Romanshorner Luftspiele”, a visionary creation by Austrian artist Barbara Anna Husar, were happening on the largest reservoir of drinking water of Central Europe, Lake Constance, on Saturday 23rd of April 2022.

The event was a performative endeavour of a new dimension, an Austrian-Swiss cross border co-creation, bundling a collective flow of energies including those of Historische Schiffahrt Bodensee, the social sculpture Flying Udder, Frauenmuseum Hittisau, Sharing Water project and the musical ALPSEGEN by Ronja Svaneborg and nine alphorn blowers.

At 6pm, three historical ships performed a triptych on the Lake, the pink Flying Udder with Ronja Svaneborg hovering above its center. There the ALPSEGEN was performed, a ritual singing tradition of Alpine regions, seeking, enducing, communicating peace in a musical form which can be heard long-distance. The singing was accompanied by twelve alphorn blowers on the three ships underneath.

“Milkyways of Peace”, the intention set by the event’s mastermind Barbara Husar, is the slogan addressing the power of the collective force to create a sustainable and peaceful future on Earth.

Numbers and Signs
Milk and Water – liquid resources of the planet were the heart of this event, reminding us of the plentiful donations of Earth all lifeforms are nourished by, and creating a feeling of thankfulness and peace.

There was a big deal of playful number magic in the setting, too. Three, six, nine – the rhythmic numbering of cell renewal and, additionally, three, four and twelve were the numbers structuring the composition of the event.
Three ships corresponding to three directions of flow of the node points of the European watershed. The number three may also stand for heavens, earth, water, having its correspondence in the Flying Udder, the ships with the guests and the supporting lake. Three-six-nine alphorn blowers contributed to the chant by Ronja Svaneborg.
The number four representing vegetative circuits like seasons or the phases of the moon, four teats of a cows udder, but also the four celestial directions of the wind steering a hot air ballon. Four times three rivers – the number twelve was made present by SHARING WATER, standing for short -and long termed temporal circuits like the day or the zodiac.

May the message of a peaceful, collective future, milkyways of peace, be heard in all realms connected to this event. 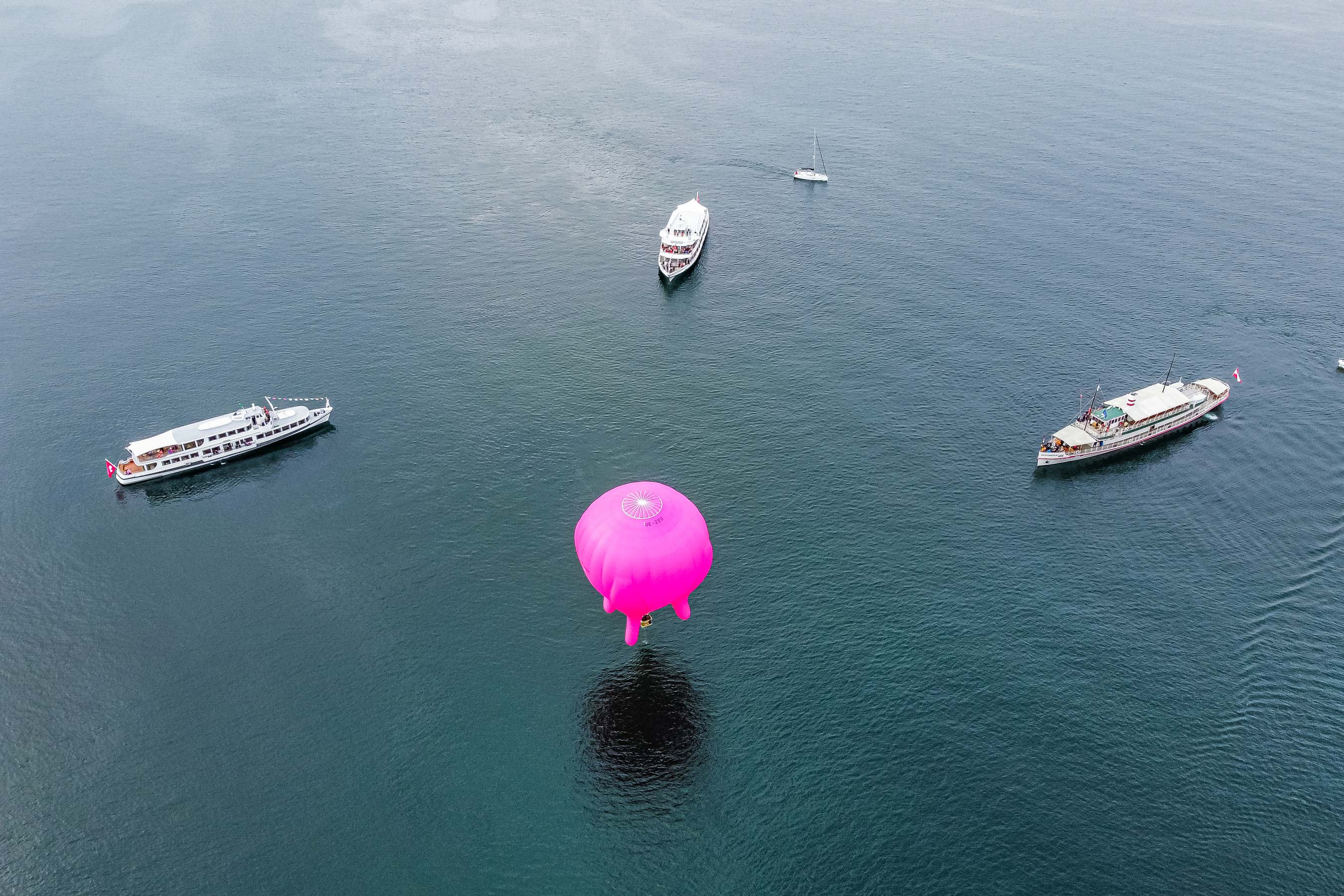 Pictures and Video by Elmar Bertsch and Michael Häfner.